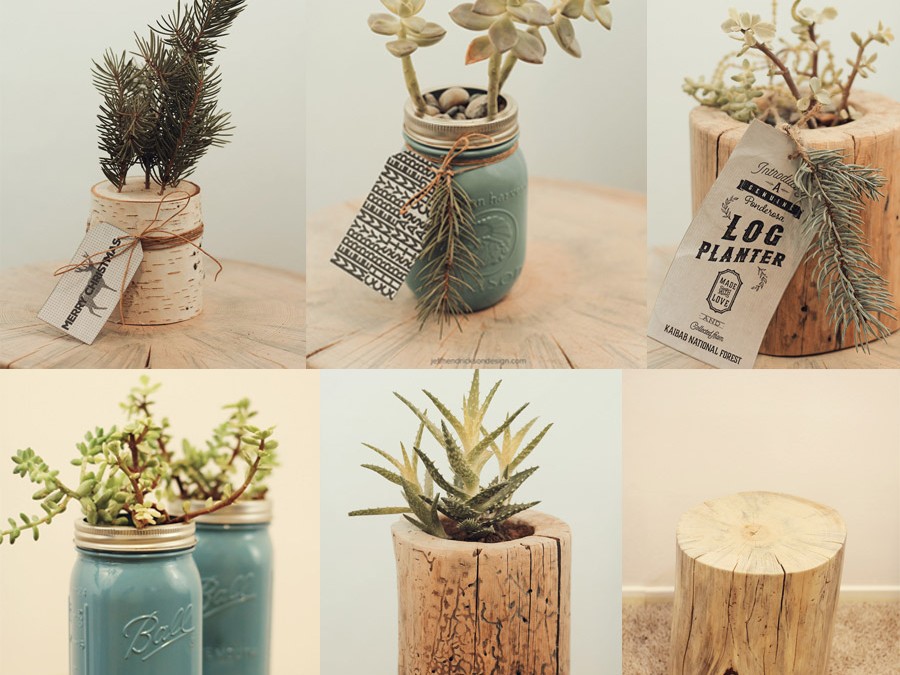 Just wanted to show some of the things I made using some tree stumps and logs, as well as some succulents and pine tree clippings.  This isn't a step-by-step guide as you can probably figure out just by looking how I created each one.  I thought they came out really good and I'm very happy with the results.

These are some of the gifts I'll be handing out to loved ones this year. 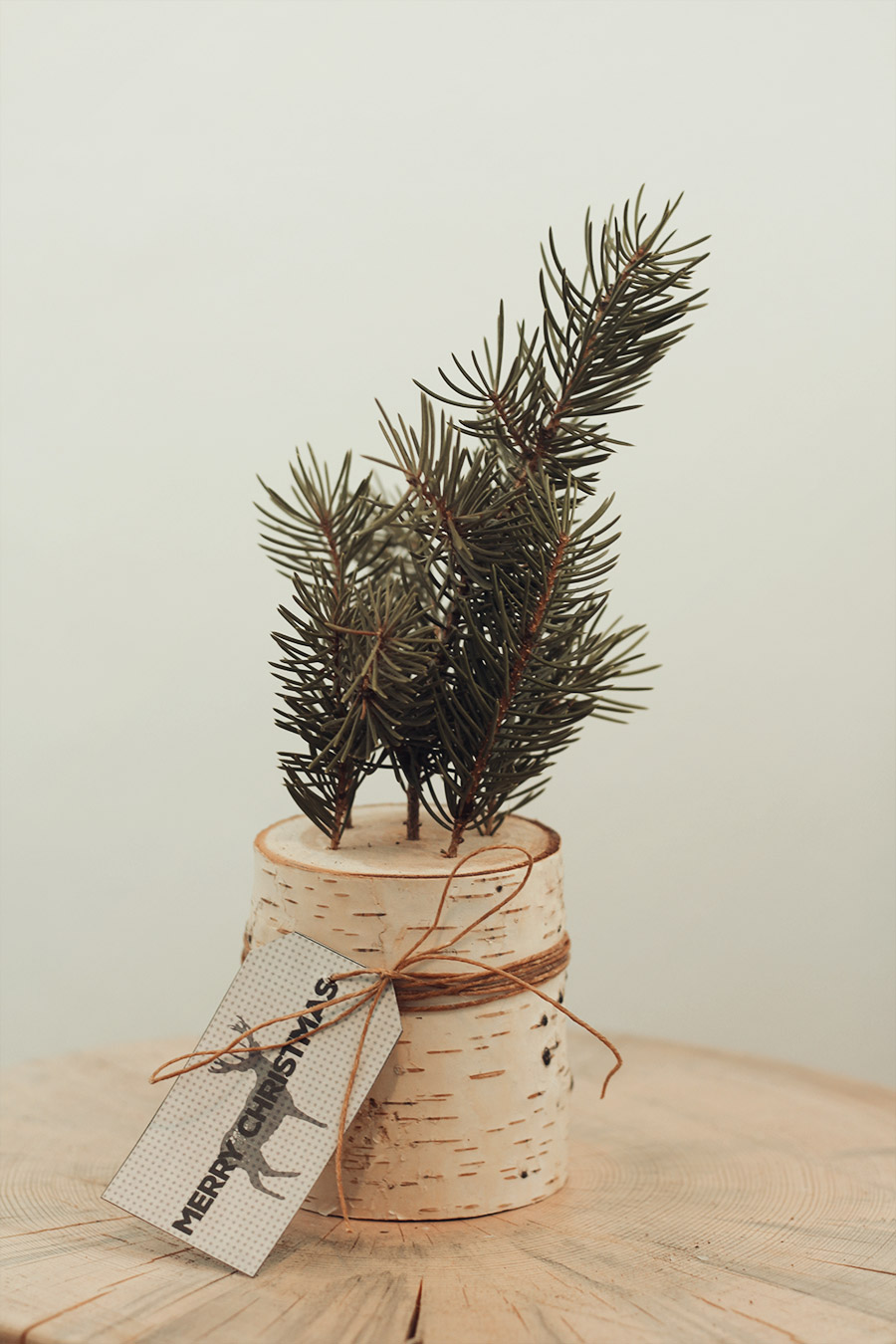 We have a white birch tree in our front yard and half of it has been dying over the last few years.  So I decided to cut that half down and just stacked it up in the back.  Well after creating some log planters using Ponderosa that was collected I thought this white birch would look really good as a Christmas decoration.

So these were really simple to make.  I just used a chop saw to cut some of the smaller logs into 3-4″ pieces, then drilled a few small holes in the top and stuck in some cuttings from the pine trees in our front yard.  I also sprayed them with clear satin shellac to seal the bark on the birch.  That should help them last a bit longer.  They were pretty much complete so all I had to do is tie some twine around them and attach the labels that I created in a previous post. 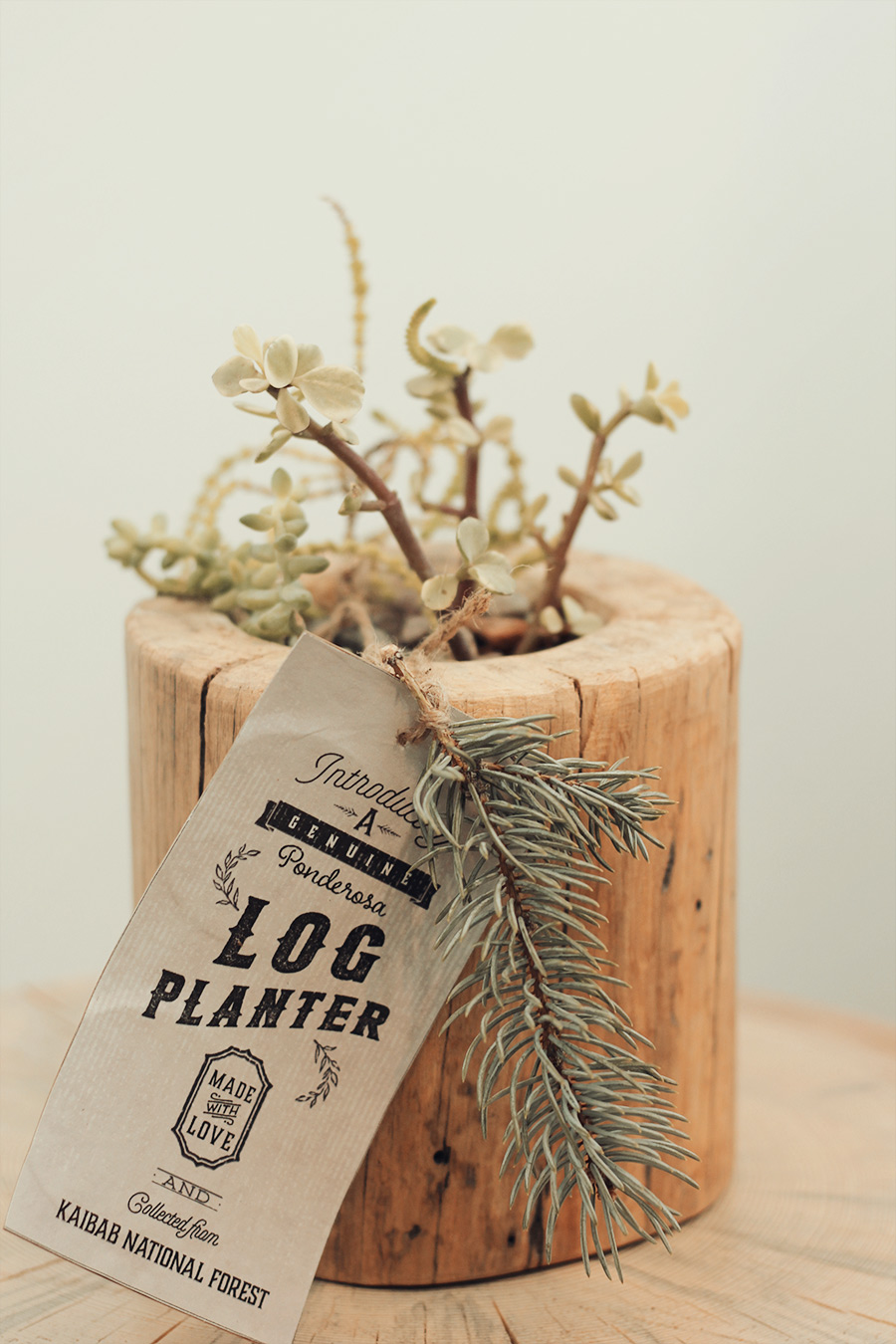 This is one of the logs I hollowed out and made into a cute planter.  I wanted to give the neighbors something for Christmas because they are so awesome.  So I thought these would be cool.

Basically these are just cut logs that I hollowed out using a couple tools.  The main one was a drill, but I also used another tool that I don't quite know the name of… it's like a circular chisel that you can hammer.  I had never seen them before but they worked great.  I used that to even out the edges inside the log.  Then I used a dremmel like tool (only bigger) to sand and smooth out the inside edge.

The outside I used the dremmel tool again to sand off and smooth out any really rough parts.  Then sanded more using an orbital sander with 60 grit, then 100 grit sand paper.  After it was smooth I rubbed on some wipe-on polyurethane from Minwax.  It was not gloss so it kept the natural wood underneath and just added a tiny bit of shine.

Some of the logs had cracks in them and I didn't want them to crack more so I used wood glue and sawdust to kinda fill the cracks up on the insides of the logs then used a flat screwdriver to mash it up and get it in the cracks.  I used a clamp to hold it a little closer together and let it dry overnight.

I thought about how I could seal the inside of the planters so they wouldn't absorb water and came up with candle wax.  I used a propane blow torch to burn a candle over the planter and covered the entire inside.  I think that it will help to keep the moisture from the dirt from seeping into inner walls.  I don't know how long it will last but should lengthen the life of the planters.

Because I'm using succulents I fill the bottom of the planters with small pebbles so that any extra water can drain into that keeping the soil semi dry.  Then filled the rest of the planter with a mix of clay soil and normal potting soil.  Succulents like loose soil that drains well.  Then I just planted in the succulents.

I used a few more pebbles to close in some of the gaps around the succulents and to make it prettier but didn't pack them in as they need space to grow and give any fallen leaves a place to possibly grow.  If you pack in the tops of your succulents with pebbles zero of the fallen leaves will be able to grow because they won't be able to touch the soil.

To complete the gift I designed labels for them which I thought added a nice touch.  They give the gifts even more of a personal feel.  I then attached the labels with twine and a pine clipping making it more festive. 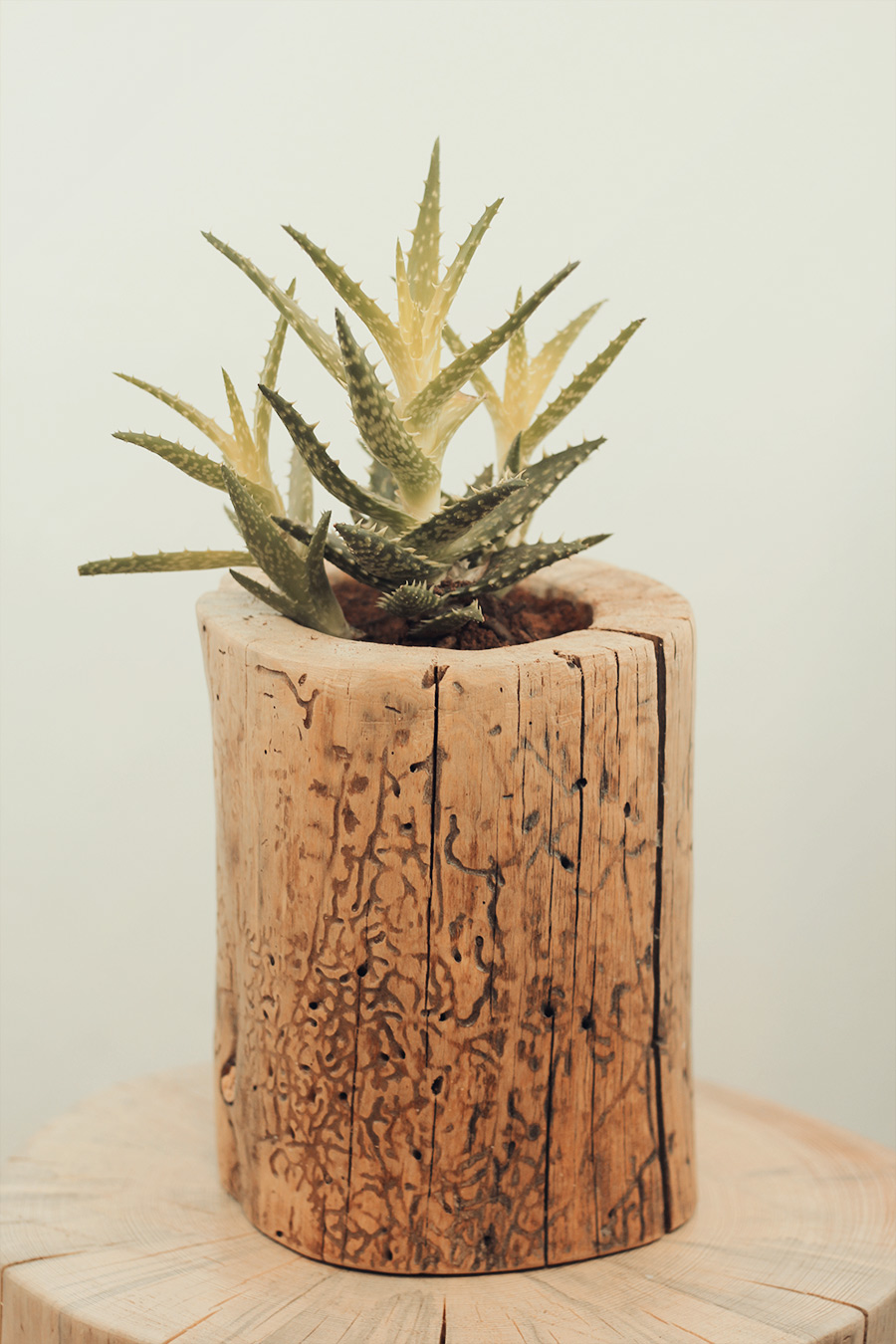 I made two different sizes of planters.  This is the larger one.  I think it's almost a foot tall and around 8 inches wide.  I really loved the look of all the beetle marks, or whatever was eating it's way under the bark.  I wanted to leave as much of that intact as I could while still getting a nice finish on them.  I think it looks cool. 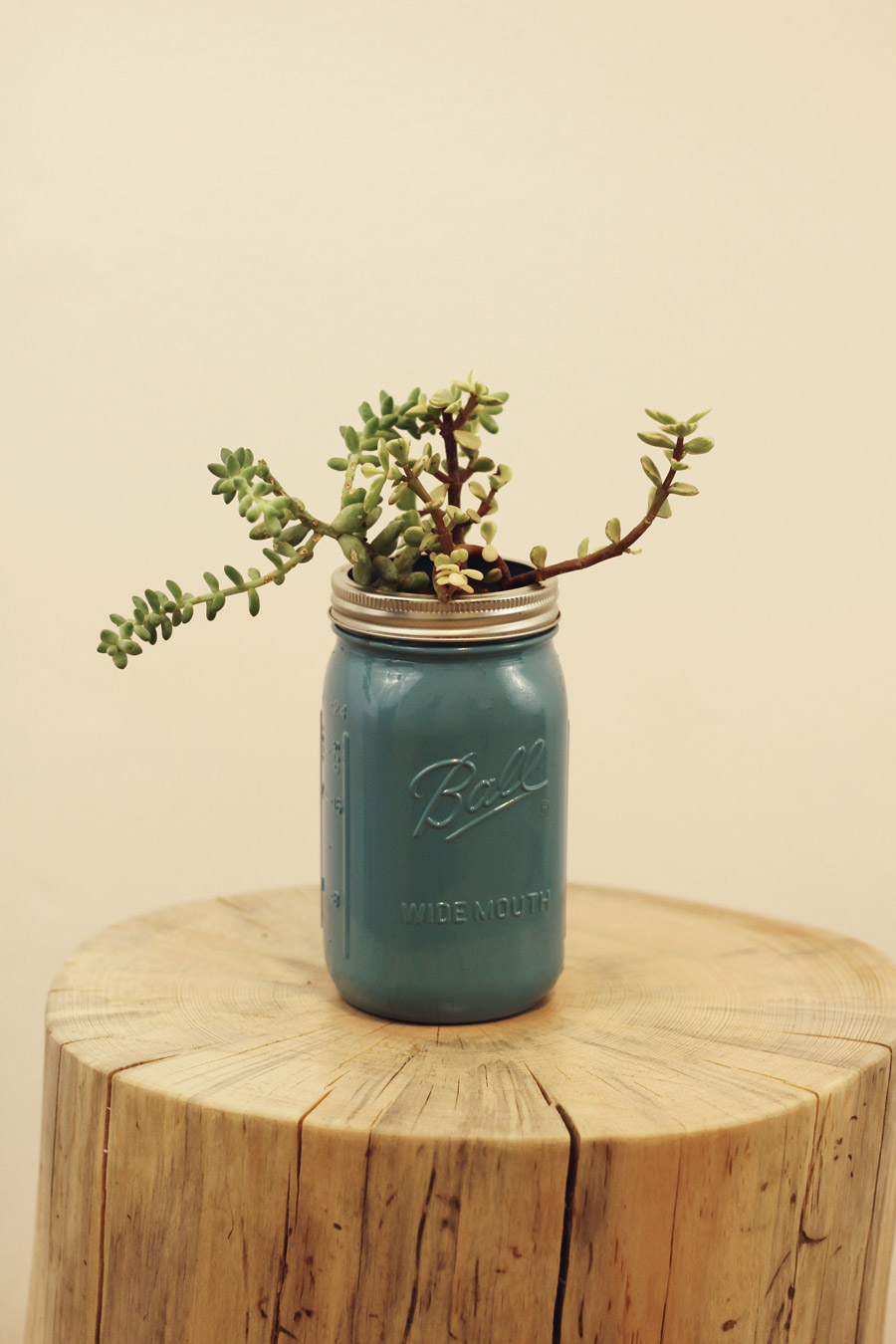 To create gifts for my kids teachers I created these succulents in mason jars.  Basically I spray painted the jars in a lovely blue color using paint I got at Home Depot.  I've seen some people rough them up so they look aged, but I liked how they looked without doing that so I left them alone.  Pebbles went in the bottom, then soil, then succulent.  I attached twine, pine tree clipping and label as you'll see below.  Super easy! 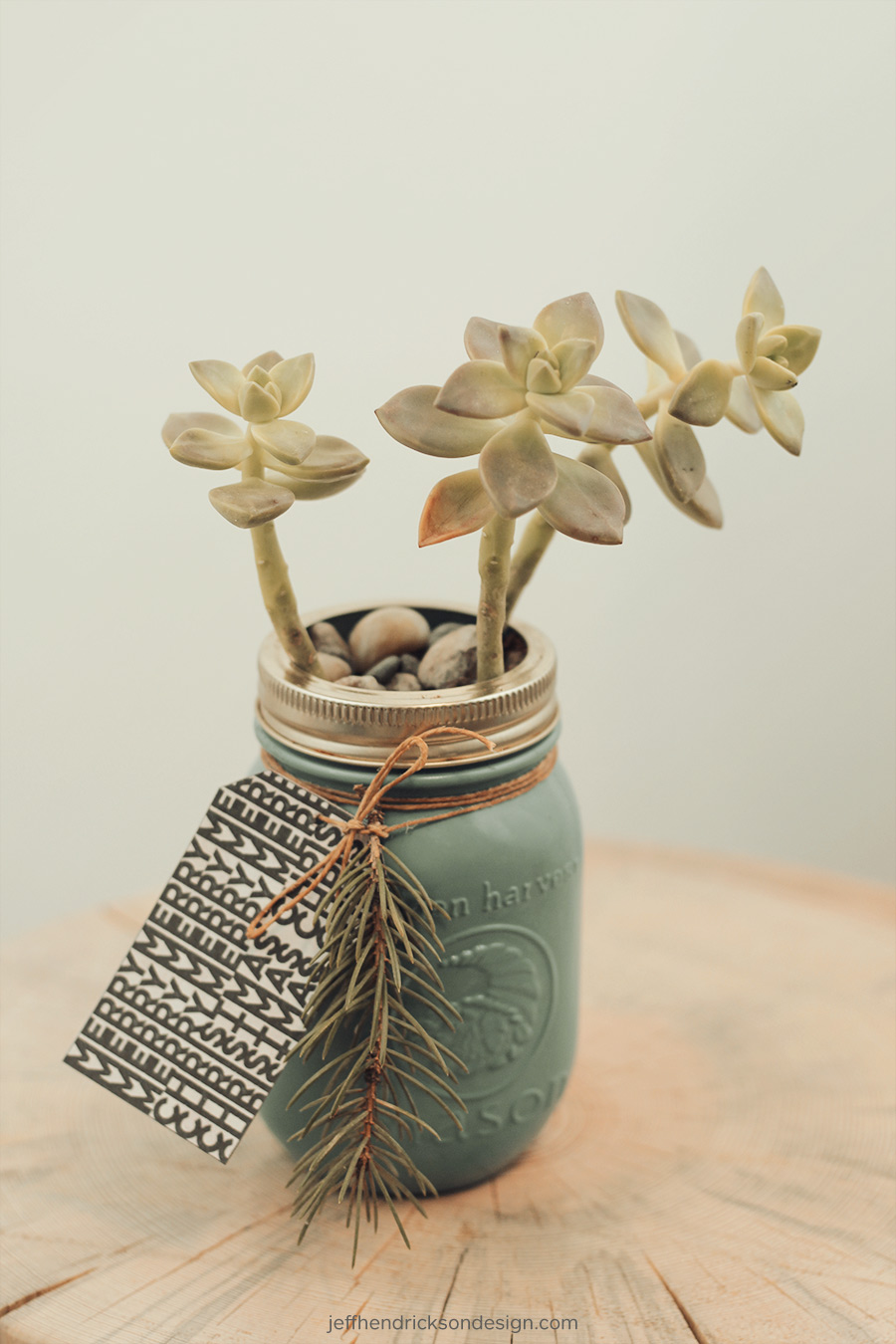 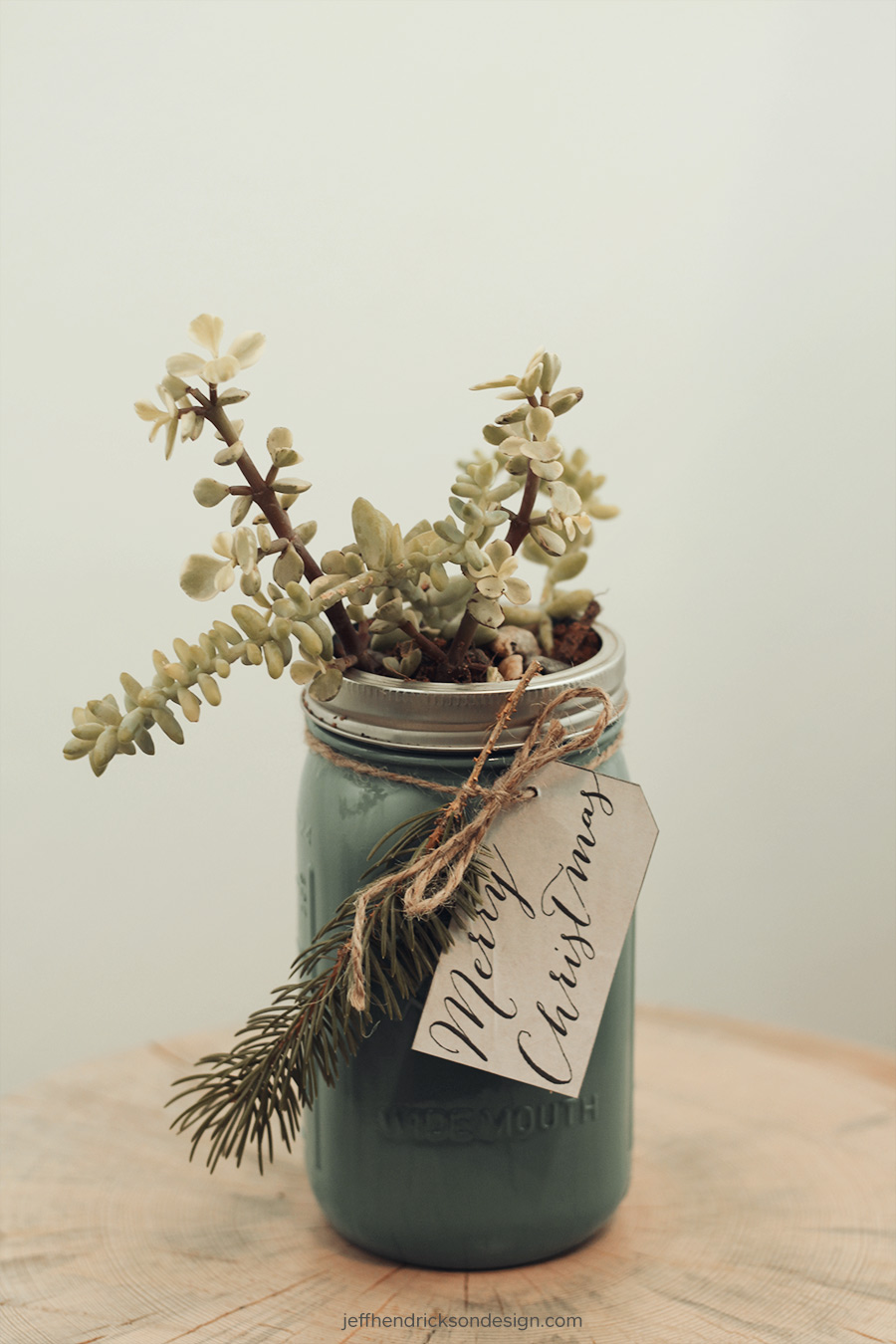 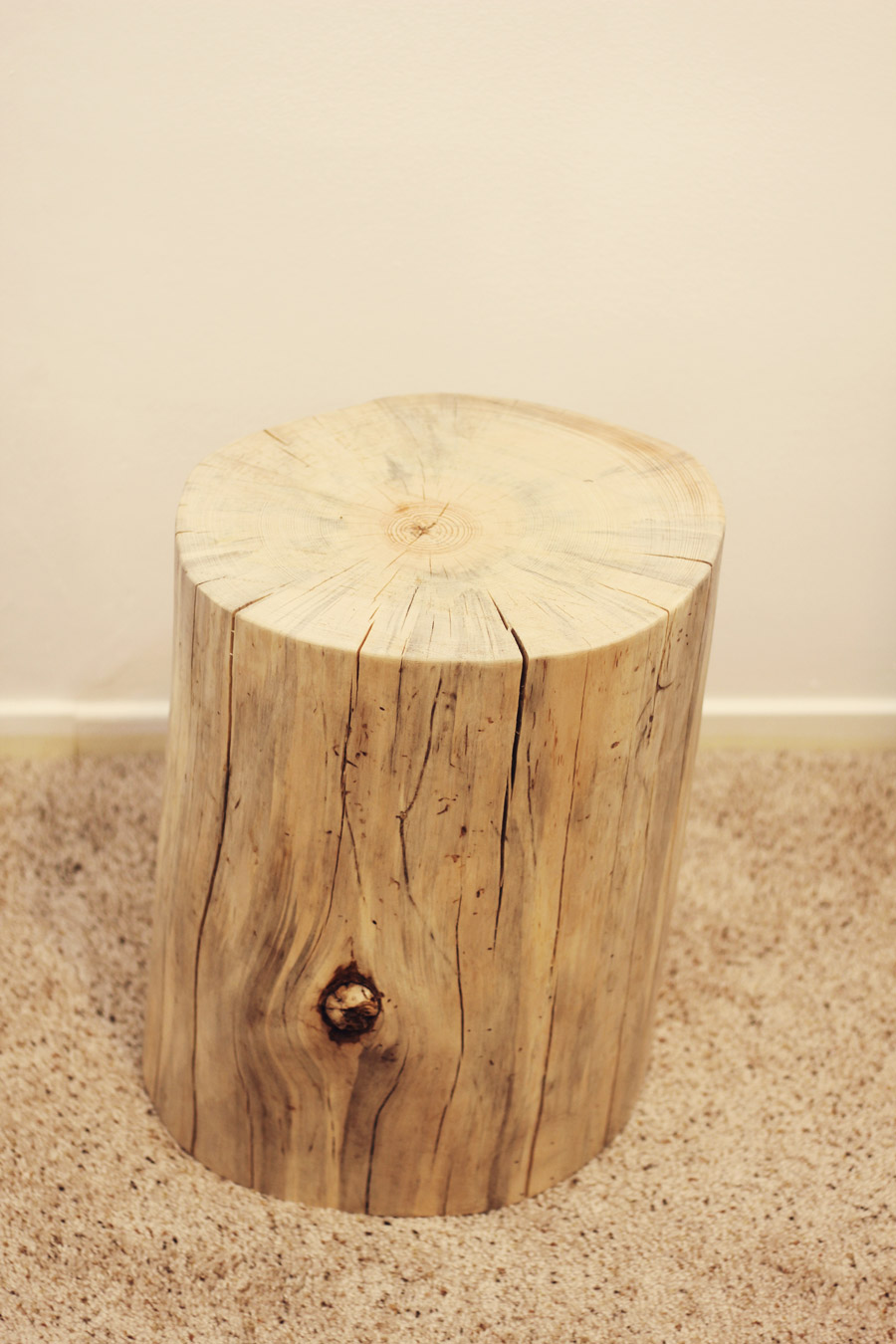 This is a tree stump side table.  I made two of them and honestly I like them so much I want to keep both, but I'll just have to wait.  These are from a ponderosa pine that fell in the Kaibab National Forest.  My neighbors had cut and collected them for firewood but I couldn't help but to turn them into something beautiful.  I asked nicely if I could take them in exchange for another stump that wasn't as pretty and they kindly agreed.  They were already in great shape being cut almost perfectly to begin with.  So all that was needed was a good sanding and polyurethane coating.

I basically used an orbital sander with 60 grit paper to get most of it smooth.  Luckily the bark had already been removed so that was good.  Because the tops weren't totally level I did have to use a planer type tool to take off some of the higher parts so they would sit flush and be more level on top.  I don't know the exact name of the tool, but it's like a hand planer with tiny teeth, almost like a file… hard to describe, but it worked well.  After sanding with 100 and 150 grit paper the stump was blown off and wipe-on polyurethane applied in 3 coats.  They both came out awesome and I can't wait to find a nice stump to do this for myself.  I really love the color of the ponderosa too.  I knew I wanted to keep their exact color which is why I used the satin polyurethane.

I created vintage labels for the tree stumps too but I haven't printed them out yet.  That's why they aren't shown, but they look similar to the log planter ones above.  The labels for the stumps include how old they are.  Just had to count the rings.  The one above is 112 years old!  Amazing right.  112 years and after falling turns into a beautiful side table.  I just love that!

All in all I'm really happy with how everything turned out and hope that the people I'm giving these too appreciate them as much as me.  What do you think?  Cool right?